« Are full-service realtors on the way out? | Main | Would you buy a GM if a year's worth of car insurance was thrown in? »

As consumers, we’ve come to both expect and understand why marketing is all around us. We know Times Square, for instance, is full of billboards because, well, it’s Times Square damnit! There’s too many people, too much disposable income floating around, for advertisers to not try and separate our cash from our pockets.

So it’s under that cat-and-mouse guise that we’re okay with ads being even in our bathrooms: on our stalls, in our urinals, even on our restroom mirrors.

Yet at least we live in a world where ads are in the present day. What we see: now. Yet, my oh my, what’s this? On a rerun of a How I Met Your Mother  episode the other day, several viewers saw something fishy. There, on a shelf from the 2007 clip, was an ad for Zookeeper, the Kevin James movie in theatres tomorrow. 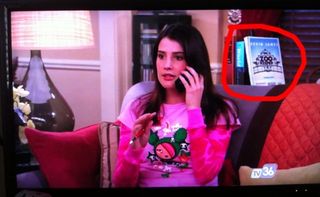 Shocked? I guess we shouldn’t be. It turns out, the network digitally inserted the Zookeeper ad to the show retroactively, which it appears is a common move in the marketing biz these days (pic to the left).

Though the ad, as you can see, is so small, so subtle, the whole premise seems a little creepy. Could marketers really be subliminally telling us to go see Kevin James talk to animals for two hours?

It’s certainly possible. While it’d be tough to prove, definitely, if subliminal advertising/messaging actually works, there have been several high profile examples over the years.

In 2007, though it was said to be a technical glitch, a McDonald’s logo famously flashed on the screen during an episode of Iron Chef America.

And even back in 1978, when the BTK Killer was terrorizing Kansas, a local news station – after the gruesome torturer anonymously admitted he watched its coverage – flashed a crime scene photo of one of the man’s victims. The pic, which only flashed on screen for a split-second, showed a pair of a murdered woman’s glasses. The hope: that the BTK Killer would see the clip and turn himself in, the flash having triggered guilt in his subconscious.

It didn’t work (the BTK Killer wasn’t arrested until 2005), but perhaps that’s what the Zookeeper  ad is aiming for in the old rerun of How I Met Your Mother – a kind of brand recognition that, unbeknownst to us, makes us want to go see the film.

Listed below are links to weblogs that reference 'Zookeeper' ad found in 2007 episode of 'How I Met Your Mother':