E-bikes can prove costly when it comes to insurance claims

Although both motorists and cyclists don't seem to crazy about them, electronic bicycles (e-bikes) are flying off the shelves these days. They're cheap to buy, cheap to run and don't leave much of a carbon footprint.

They are, however, subject to provincial traffic laws; that is, they can ride in traffic with motor vehicles, like scooters, and their operators mustn’t drive recklessly or under the influence of alcohol. Here's a good summary of the existing rules.

More importantly, they also don't need a license or insurance, according to a recent Ontario Court of Justice ruling. But taking that latter option at face value might be shortsighted, warns My Insurance Shopper.

Political issues deemed too important or sensitive to be tampered with are often referred to as the 'third rail' after the electrically-charged third rail in subway systems ... like Canada's pension system, for instance. 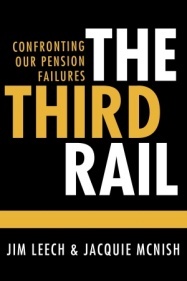 “Many Canadians will be surprised by how much they will need to save to fund their desired income in retirement and that their income is going to plummet,” says Jim Leech, co-author of The Third Rail: Confronting our Pension Failures.

“It’s clear that existing pension structures are not allowing people to reach their saving goals. Political leadership is urgently required to bring a more flexible approach to retirement planning, one that can withstand the pressures of more retirees and longer life expectancy.”

The easiest and most efficient way to close this shortfall is to enhance the Canada Pension Plan, he maintains. But that's not likely to happen anytime soon, since most workers and their employers are simply too short sighted.

Every person loves the idea that they could earn points while spending money that they would any way and eventually, they would be treated to a free trip. Unfortunately, about 68 per cent of people surveyed faced irksome situations when it came to cashing in their points, according to a recent survey conducted by Capital One Canada.

Some of the major issues include hidden fees, blackout dates and the lack of flight availability.

But there is one ray of sunshine within this survey, apparently credit card companies and airlines are changing their ways since customers aren't afraid to walk away and switch card providers, says the survey.

With many travel reward cards to choose from there's lots to consider including annual fees, extra benefits, such as car rental or travel insurance, interest rates, where you can collect points and how quickly you can accumulate points. Most importantly, you should consider any details about the redemption process, such as if there's an expiry date on using your points, and how many points you'll need to redeem for a flight to wherever you want to go.

It's a surprise that we hope never happens to us.

The new owner of an apartment walked in to find the hanged body of the previous owner behind the front door when the locksmith opened up his newly purchased property. While it's odd that the body wasn't found earlier, you think the buyer would have visited the property before signing any papers, apparently the body was undisturbed for eight years, according to a local France newspaper.

Thomas Ngin, a security guard, had been fired from his previous job, dealing with court proceedings with his employer in legal court and facing debt issues.

The bank seized his property and sold it at an auction where it was bought for 415,000 euros (about $598,889) in early October. It explains why the owner never saw the property in advance, but he's likely regretting that decision now.

Rather than downsize, retiring boomers hope to stay put

If you read the headlines, just about every urban boomer is leaving the suburbs behind and moving into condos or lofts in a trendy downtown area.

Yet there's little evidence that most Canadians are actually that open to the idea of moving into a smaller residence as they grow older.

A majority of Canadians aged 50 and over – 83 per cent – said staying in their own homes and paying for home care is the most appealing option for them, accordsing to Royal Bank research.

Even then, while the majority of us want to ''age-in-place'', this doesn't necessarily mean that we expect to stay in the same house. Most people are attached less to a particular pile of bricks and mortar than to a local area – to a network of friends, services and familiar places.

Among those who were already retired, a decision to move out of their home was most often due to a change in their health – 66 per cent – rather than to cash in on their home equity or get closer to restaurants.

"Remaining in familiar surroundings – in a home of their own, in their current neighbourhood and close to family and friends – is definitely how Canadian Boomers wish to live when future health changes occur,” says RBC head of retirement and aging strategies Amalia Costa.

Should live kidney donors receive $10,000 for an organ donation?

If governments and hospitals want to attract more kidney donors, they might want to consider paying living donors $10,000, according a recent study released by the University of Calgary.

This would raise the number of transplant surgeries by five per cent and it would help save an overall $340, since the patient would no longer be on dialysis, while adding an extra 0.11 years to a patient's lifetime compared to our current donor system.

Canada faces an unfortunate shortage in organ transplants. It leaves some patients on waiting lists for years as they undergo treatment and hope that they will be next in line for a donor organ, but it also contributes to a demand for black market organs overseas. Unfortunately, the number of donors hasn't changed over the last decade, which means it leaves many people out of luck.

How far would you go to land a job?

When you start job hunting, it usually involves shopping around your resume to your past or present work contacts, along with networking and applying for online postings.

U.K. resident Dan Conway took job hunting to a whole new level and it finally paid off when he landed a job as a marketing executive in the U.S., according to the Daily Mail.

The 28-year-old advertising graduate lost his job as a project worker at a youth center in June of 2012. He took on other odd jobs, but then decided to focus on breaking into the industry. He branded himself as the "extreme job hunter" and the young father of two put his skills to work for his most important challenge: marketing himself. He put up videos of crazy stunts he did, such as selling himself on eBay and even taking part in a gravy fight, all in an attempt to create a viral campaign. Well, it looks like he caught the attention of the right people.

This isn't the first time that people have pushed against the typical route to land a job. Another unemployed U.K. worker put up a billboard that was a part of his campaign to land a job in the media. After a month, he received 60 job offers in various positions, job hunter Adam Pacitti told AOL Jobs. His last 500 pounds (about $770 U.S.) was spent on that billboard it was well worth it.

According to the most recent numbers, absenteeism rates in Canada have been rising over the past 10 years, jumping from roughly seven days lost per worker annually to more than 10 currently.

And much of this has to do with demographics, according to a recent study from the C.D. Howe Institute.

As the demographic weight of the population shifts from younger to older categories, reported sick days rise significantly, the report claims. For example, men ages 45 to 54 report an average of 1.3 more days lost due to illness than do males 35 to 44.

Age is not the only factor keeping people off the job, of course.

Over the past 25 years, the average number of days lost per year due to illness has remained largely unchanged among men but increased sharply among women.

That's not that surprising when you consider that women are usually the principal caregiver for children and may take time off “sick” to look after them. As well, a higher proportion of women than men work part-time, skewing the numbers accordingly.

Are you getting the most out of your company benefit plan?

If you're lucky to have a decent benefit plan at work, you probably value your health coverage. But are you getting everything you can out of the plan you have?

Corporate health plans increasingly have features that are tied to a 12-month cycle, including annual deductibles, preventive checkups and, in some instance, health-spending accounts.

Employees who don't pay attention to the calendar risk wasting fully covered benefits and paying more than they have to for procedures delayed until the following year.

For example, a dental plan may limit expenses in a calendar year while a vision plan bases its cap on a moving 24-month window.

If your plan benefits do roll over in January, one thing you might want to check is that you aren't missing out on important counselling services or potential stress-relieving perks like massage treatments or physiotherapy.