Written by a mother and son duo from Southern Alberta, Boomer (Marie) and Echo (Robb) offers the most unique combination of authors in the personal finance space. While Marie shares her stories about once struggling to raise a family and retiring with a decent income so she can do all she’s dreamt about, Robb discusses building his portfolio and working towards early retirement. He also knows a thing or two about the best credit cards in Canada!

Launched in 2010, the Canadian Couch Potato teaches readers about investing using index mutual funds and exchange-traded funds (ETFs). The “Couch Potato” strategy, as it’s now known, is growing in popularity as more people become disillusioned with overpriced, actively managed mutual funds and stock-picking strategies that try to beat the market. The blog’s author, Dan Bortolotti, is an investment advisor in Toronto, as well as a freelance writer.

Gail Vaz-Oxlade likely needs no introduction. She’s a financial writer, author of more than a dozen personal finance books, host of a number of television shows, including ‘Til Debt Do Us Part, Princess and Money Moron, and has been helping people with money for more than 20 years. On her personal blog, Gail shares advice on how to get out of debt, how to budget, how to save… and how to cook, relax and enjoy life, too!

Give Me Back My Five Bucks

In 2007, Krystal Yee found herself up against $20,000 of consumer and student debt. In deciding to get serious about her financial situation, she started a blog to document her debt repayment journey. Krystal wiped out her debt in just 12 months, then moved on to talk about building up savings, buying her first home in Greater Vancouver, saving for retirement, and travelling (and even living) abroad. She was also a contributor to the Toronto Star’s Moneyville site for many years.

Frugal Trader, as he’s known to readers, began investing in mutual funds when he was just 16 years old, and got more serious about real estate and the stock market when he graduated from university. Over the years, he’s built an equity portfolio that has continued to grow. When he started the blog in 2006, he had a net worth of $200,000 and was determined to reach $1 million by the end of 2014; he achieved that goal six months early, in June. FT lives in Eastern Canada with his wife.

While she’s not a debt blogger (and should be proud of that fact!), Jessica Moorhouse has been obsessed with personal finance for years. Born and raised in Vancouver, she now lives in Toronto with her husband, where she works as a digital marketing coordinator. For the past three years, she’s been writing about everything from finishing school, changing careers, getting married, budgeting as a couple, moving across the country… and possibly buying a house in Toronto!

After graduating from the University of Alberta with a BSc., Bridget Casey realized she had over $21,000 of student loan debt – and wanted it gone. She started her career and began putting large lump sums down on it, while building her investment portfolio and saving for retirement. She paid off her debt in less than 2 years, which she wrote about on her blog. Bridget is now completing her MBA at the University of Calgary, and wants to help her readers build happy (and wealthy) lives.

Barry Choi is one of the newer personal finance bloggers on the scene, but has a wealth of knowledge to share. With lots of travelling under his belt, he’s a self-described budget travel expert, and provides practical money saving tips to help you take your next dream vacation. When he’s not writing about that, or updating readers on how his investments are performing, Barry works at a TV newsroom in Toronto (where he lives with his wife).

Jordann did all the things a millennial is told to do: go to school, get good grades and get a degree. After that, she would get a good job, make decent money, and go on to tackle all of life’s other milestones… right? Not when you have $38,000 of debt to payoff first. Since February 2012, she’s cut back on spending and documented her debt repayment journey (took less than 2 years), as well as updated readers on her savings goals and overall net worth. She also recently moved to Halifax.

Mark Seed, of Ottawa, started investing when he was in his early 20s, after reading The Wealthy Barber. While he was first putting his money into mutual funds, and paying high management expense ratios (MERs), he eventually learned his lesson and started to pay closer attention to where, how and when he should invest. My Own Advisor is a personal finance and investing blog dedicated to chronicling his journey to financial independence.

While overspending is the cause of debt for many, that wasn’t the case for Catherine and her husband. No, her student loan debt is the reason they’re in deep – and the couple in Atlantic Canada is currently trying to pay off $70,000 in just 36 months. Catherine’s motivation came when she went on maternity leave and lost a substantial amount of monthly income, but she and her husband are now determined to reach debt zero and experience life on the other side.

If you describe yourself as “frugal” – or even remotely aspire to be so – Kerry Taylor can help you come up with a few ways to cut back. What started as a newsletter for friends in 2008 quickly turned into a fun blog with a strong focus on consumer smarts. She uses (mostly real) math and “science” to prove when something being sold to us is a bad deal, and the results are often humorous (and include great pictures to boot). Kerry lives in Toronto with her husband and their daughter. 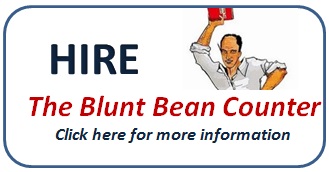 Mark is a Chartered Professional Accountant and a partner with a National Accounting Firm in Toronto. Simply put, he knows money (especially income taxes) and is also fascinated by the psychology of it all. While his posts are targeted to high net worth individuals and owners of private corporations, there’s something on The Blunt Bean Counter for everyone. Just be warned that his opinions are, in fact, very blunt!

What started as an idea to create a resource that would help university students better understand personal finance turned into a mission… and a much bigger adventure! Kyle and Justin, two guys from Manitoba, first launched their own site, then took over Young and Thrifty from its original author. On the site, you’ll find posts about everything young adults need to know about, beyond how to pay off student loan debt (think: mortgages, investing, asset allocation and more).

Blonde on a Budget

That’s me! Well, that’s me when I’m not at work. I started my blog in 2011, when I realized I was maxed out with nearly $30,000 of debt. Blonde on a Budget first served as a place where I could stay accountable and document my progress. I paid off my debt in two years, then moved on to talk about savings, travelling and minimalism… and I’m currently in the middle of a yearlong shopping ban, which might inspire you to cut back in 2015!

You may also find these articles interesting